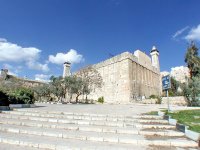 The founding father of the Jewish nation (and of all monotheistic faiths) is Abraham.  The biblical account of his journey through Israel evidences his purchase of a burial site in the City of Hebron, for his family at the cost of 400 silver shekels.  Indeed he is buried in the cave of Hamachpelah, along with his son, Isaac, grandson Jacob, and the foremothers of Judaism, Sarah, Rebecca, and Leah.  Since the time of his death, more than 3,500 years ago, there has been a continued Jewish existence at this site.  (That is, except for a few years commencing in 1929 when Hebron was ethnically cleansed of its Jewish population by the genocidal Arabs.)  You would generally consider thousands of years of continued settlement to be fairly indigenous.

Not so as far as the West Australian is concerned.  They have an article in their paper today that considers Hamachpelah to be a “disputed” holy site.  The article implies it is a provocation for Jews to want to learn about their heritage at this site, that teachers of Judasim are now “Jewish extremists”, that the residents are amongst “Israel’s most radical”, and cites that Palestinian children are forbidden to walk on the street leading to the compound, but Israeli children can.  The article then changes tack to quote “Yesterday, Israeli forces killed three Palestinian men along the tense border with the Gaza Strip.  Israel’s military said they were militants, but relatives identified them as fisherman”.

Once again its time that the West Australian paused to consider some honesty and truth in the perspective of their reporting.

That truth includes the salient but omitted points, just some of which are:

Regarding the fisherman, we all know that there are plenty of fish to be caught on Gaza’s inner border with Israel.  But a quick check of the Israel National News service shows how this incident was reported in Israel:

Around 2:15 this morning, an IDF force noted several terrorists approaching the border fence separating northern Gaza from Israel. In a repeat of dozens, possibly hundreds, of previous incidents in recent years, the terrorists were attempting to plant bombs, hoping to detonate them later against a passing IDF patrol.

The force fired on them – from the air, ground and sea, according to some reports – and later found three bodies at the site. The IDF alerted an Arab medical crew, which arrived and took the bodies to a Gaza hospital.

The IDF noted ominously that the presence of terrorist elements near the border fence is utilized for the placement of bombs and the planning of abductions and attacks against IDF soldiers, and as such, endangers both the citizens of Israel and the security forces.

Terrorists from Gaza have fired Kassam rockets at Israel on at least two occasions in recent days. A week ago, Israeli aircraft attacked a tunnel used to smuggle arms into northern Gaza. In two of the tree targets, explosions followed the Israeli attacks – indicating the presence of explosives and the like.

Last night’s attempted Hamas attack took place in what used to be the Israeli town Dugit – the northernmost Jewish locale in Gaza, which was destroyed along with Gaza’s 20 other Jewish towns in the 2005 Disengagement.

Shame on the West Australian for once again attempting to delegitimise the connection of the Jewish people to their homeland.  Their reproduction of distorted and selective reporting, devoid of context and demonising Israel for it’s legitimate nation building is an absolute outrage.

More on what surrounds this media beat up, and a more enlightened perspective, comes from David Wilder, a head of the Jewish community in Hebron:

This is our heritage, our gift to mankind. And it began here, in Hebron. This is the roots of our life in Israel. Anyone who condemns Jews living in Hebron, also rejects the rights of Jews to live anywhere in Eretz Yisrael, decimating the legitimacy of the State of Israel. You can cut off the branch of a tree and it will continue to live. But if you chop off the roots, it dies.

The deniers of Jewish history know this.  The media, their propaganda agents, are complicit in miseducating people the world over about the historic bond between the Jewish people and their homeland.