…and look at the photo, and give thanks…AM YISRAEL CHAI!!! 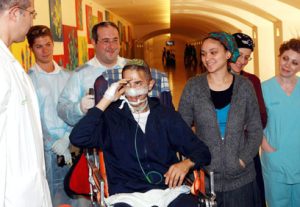 2nd Lt. Aharon Karov was called up for service in Gaza the morning after his wedding and critically wounded in combat. Today he said saluted the doctors who three weeks ago gave him scant hours to live â€“ and left the hospital Meital Yasur Beit-Or

…Platoon commander 2nd Lt. Aharon Karov, 22, was ordered to cut his leave short and report for duty in Gaza the morning after his wedding to Tzvia, 19. She was by his side on Tuesday as he said goodbye to the doctors who saved his life at Beilinson Hospital in Petah Tikva. The young officer will continue his rehabilitation at the Shiba Medical Center in Tel HaShomer.

…”He has amazing, tremendous will power,” Rabbi Karov added. “Several times he asked me, through sign language, if his legs were okay. He tried to get up but couldn’t, and I explained to him that his muscles were lax. But he is so motivated, and he’s aware of his condition.

Aharon’s doctors also agree his rapid recovery is nothing short of miraculous. Trauma Unit chief at Beilinson, Professor Pierre Zinger: “When he was brought in everyone was pessimistic and thought his hours were numbered. The injuries were very bad, but in the end there was no injury to the brain.”

Another doctor who came to say goodbye was Dr. Steve Jackson, the neurosurgeon who operated on Karov immediately after his injury. “Things were extremely bad, I told the family he serious head trauma. They all cried, his wife too, and I told her: ‘God willing, I’ll yet circumcise your son,’ and then she smiled.”

Jackson, a major in the Golani Brigade, saluted Karov as they said goodbye.

Karov’s family agreed to allow cameras to capture his emotional departure from the hospital “to strengthen the Israeli people,” his father said. “We want to show them that there is no despairing. That everything can happen, on the personal level and the national one.”…