It’s been some time since I was active in the blogosphere. I am of the view that if a person cannot constructively contribute then they should get out of the way of those who do. Constructive criticism fits the definition, and I end my blog hiatus on this mantra, by …

What makes this art so special is the two young men behind The Really Useful Recyclers, Josh Flintoff and Courtney Smith. There journey in life is different to most of us as they deal with the effects of Autism on a daily basis. Things we take for granted are more difficult, a challenge for us becomes a huge obstacle to achievement in their every day lives. Despite the odds being stacked against Josh and Courtney them, together with their two mothers Deb and Del they created a programme to recycle paper into paper art.

The results were on display last Sunday at Carmel School where a huge collection of art works was displayed to the many visitors from all over Perth. The amount of support from the wider Perth community dwarfed, the Jewish community representation. Most of the art was sold to an enthusiastic crowd who continued to roll in throughout the day, long after the formalities were over at the VIP morning tea. The support from various politicians was highly appreciated with the Hon Stephen Dawson MLC, Minister for Environment and Disability Services attending as well as Simon Millman MLA, Member for Mount Lawley. 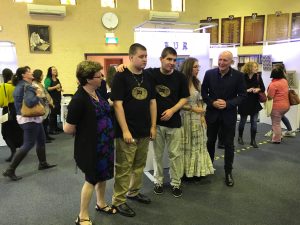 Any endeavour of this size, does not happen without blood, sweat and tears. Inspired by helping others and putting back into the community, Gila Cherny (Year 12 Carmel Student) first approached Shula Lazar (Principal) and Leanne Ben Majzner (Art Teacher) about the idea and together with the help of a few v

olunteers and helpers, dreams became reality. Top marks to the school for backing their students and showing them the right path in our community. Its great to see the school nurturing talented students who can organise and inspire others for good purposes.

For more information on the The Really Useful Recyclers visit their Facebook Page.

There are some in our community who beleive that the NIF, not having a forum to advertise, espouse their duplicitous and dishonest policies towards Israel is a major impediment of free speech. These same people have tried to equate the NIF not having a forum as unfair and unjust, because …

Australia has a Jewish education system, considered by some to be world class and held in very high esteem. Combining secular studies with Jewish learning, and catering to every spectrum of religious observance or thought, it is hard to argue the importance of our Jewish educational institutions, specifically the Jewish dayschool movement. These results have come at a price, and while the price was worth it at inception, when the level of education was more affordable, the situation at the coalface is now very different.

Carmel School fees have increased 57% over a 10 year period.

I am sure there is some kind of justification, why fee paying parents, need to pay 57% higher costs for education over a 10 year period. Whatever the justification it is irrelevant. We have entered an age where there is little wage growth and low inflation. A situation not destined to change anytime soon, unfortunately. Generation X, the largest fee paying group at Carmel School, are now the first generation in Australian history more likely to have gone backwards in wealth generation compared to their parents. In layman’s terms when you die, you will have less to pass onto your children and family.

The system has majors cracks, there exists no leadership in Sydney, Melbourne or Perth who will discuss any other option, other than the status quo, despite being warned repeatedly over the past 10-20 years that in the future, Jewish dayschool education will only be an option for the rich and the poor. The rich will have the money to pay regardless of the amount and the poor would potentially be eligible for subsidy’s from The JCA or another funding mechanism such as the Seeligson Trust in Perth. No real funding mechanism exists, to assist those hard working families shouldering the burden in the middle. Middle class families do not show on the radar, because they never considered Private Jewish dayschool education as an option in the first place because of the financial burden.

As people leave the system the school has no real choice, but to raise fees because, reducing cost structures in schools is very challenging. Certain subjects have to be provided, to comply with federal and state regulations. Cutting subject choices, turns potential fee paying parents off, because the perception is the product is not as good as other competing schools. School buildings are built with a 25-50 year plan to accommodate a certain number of students, if the enrollment numbers decrease, the building remains and has to be maintained regardless. In the increasing fees scenario, the burden increases on non subsidised families who would also have a financial breaking point, after which they look at alternative options. Those families receiving a subsidy would draw more from the already pressured and finite funding systems, so the impact on the community becomes greater as less funds exist to subsidise other important areas of education, welfare etc.

Other factors affecting the number of students for potential enrollment are a declining birth rate in Australia, low wage growth since the GFC in 2008, an increasing tax burden to fund politicians lifestyle choices and debt binges, coupled with much higher rates for utilities. Less children to educate and less money to spend on education.

Currently in Sydney and Melbourne there are a number of public schools that are almost 100% filled with Jewish kids and have introduced a more in depth Hebrew/Jewish studies curriculum. It is certainly not of the same standard of a private Jewish dayschool, but its free. Many families over East have only one choice now, and that is to purchase an overpriced 2-3 bedroom unit and somehow survive. Private dayschool is not an option unless funded externally i.e grandparents, Jewish Welfare, JCA etc. The generation of grandparents funding school fees is almost finished and there are real questions over how long welfare subsidies can provide for the next generation. The money has to come from somewhere.

What next ? I hope as a community we can engage in proper debate, and discuss the options. It is not reasonable for the school to continually increase costs above inflation and expect the full fee paying parents to shoulder the burden. This is a shared responsibility for the school community and it is time all aspects are investigated, starting with teachers salaries, fee subsidy misrepresentation, general wastage, educational programmes that cater to the few and not the many. What is the likelihood of the school committing to a CPI capped fee regime ? Are we willing to accept that with such a restriction some programmes are cut and not available to our children ?