Now standing on the other side of Yom Kippur, I ended my fast with a review of three books.

The first was the book of life.  An important metaphorical work, the book of life is the ultimate combination of self-help, philosophy, spirituality, and suspense.  Self help, because it guides my process of self reflection and realisation, a purview into those things that really matter.  The philosophy is that of the meaning of life, for once it is not the satirical context of the phrase favoured by the ilk of Monty Python.  The spirituality is that of the crescendo of tefillah, invoking the imagery of the gates of heaven.  The suspense is that, even though the book has been closed, and the cover sealed, we still do not know the end of the story.  It is merely a matter of fate as to whether we get to read the next chapter of this book when the month of Tishrei next arrives.

The second book was the Artscroll Machzor.  Replete with commentary and a modern typeset, the machzor is a wonderful compliment to the Neilah service.  However it was the sound that surrounded these pages that brough them to life.   How privileged I was to be able to stand in Shule here in Perth, within an environment of intense tefillah, with such a strong and focussed shule community around me.  The effort and dedication of those who work so hard to deliver our Shule services is a book and a story within its own right.  Not only did I have the book in my hand, but  I was able to read it in unison with the kehillah, adding an entire dimension to the book, and the collective story of those who read together.

The third book followed shortly afterwards.  It was called “Facebook”.  By comparison it was a superficial and baseless book, a mix of meanlingless soliloqy and banality, interdispersed with the occasional moderately amusing line of wit.  It contained an endless amount of status, the relief of making it through the fast.  One of my friends had the chutzpah to update his status from his blackberry in shule; 3 hrs 2 go, 2 hrs to go, eating now…..

Apparantely the pinnicle of Yom Kippur can lead us to a “status” of quelling our hunger pangs, putting up with endless Al Chataim’ proclamations, and commenting on my girlfriend’s outfit.  I searched the book, for even a small expression of gratitude that the Yom Tov delivered us the impetus to confront the year ahead.  I had almost given up my search, and then I finally stumbled on a facebook conversation worthy of inclusion in the book of life itself.

I recommend a read of all three books, each and every year.  However I also recommend that the way in which we approach and use these literary gifts is through an approach of trepidation, of great care and consideration.

May we read much in the year ahead. 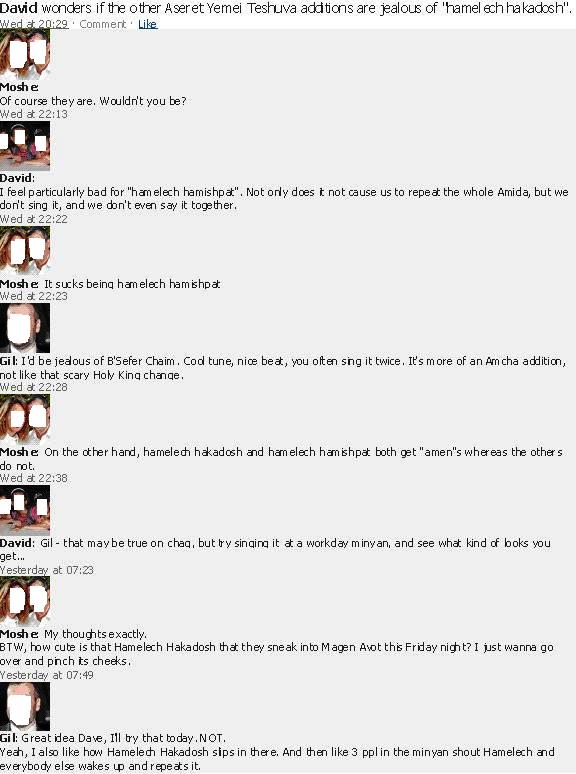