This post is about everything that is wrong with our media.

It may not seem like much, but there is an article with a Reuters picture on page 58 of today’s West Australian.  The headline is “Kites soar to record”.  The article reads as follows:

“Thousands of children in the Gaza Strip have attempted to set a world record by flying colourful homemade kites amid the ruins of Israel’s bruising offensive earlier this year.  The event, sponsored by the United Nations, attrated about 6000 children to a beach in the war torn north on Thursday, where they released their kites.  It was a rare display of joy in the isolated Palestinian territory ruled by Hamas miltants”.

Nothing else to see hear folks, move right along.  The story sits comfortably with the narrative that we expect to see and hear, that suits the political agenda and media agenda.  Israel has left a trail of destruction, and the UN are just helping to bring a little joy to the poor freedom seeking children of Gaza.

That would be a wonderful report, if in fact this was the story.  Do we not expect our media to dig a little deeper and pull out the real issues?  Do we not want to better understand what causitive influences underlie this conflict?

Our friends at Israellycool also have some coverage of this story.  They alert us to this photo of the event 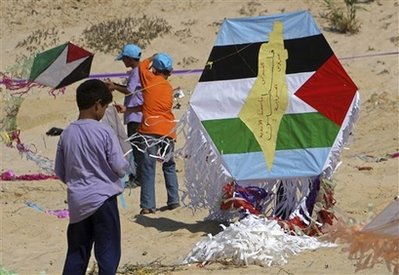 So there is in fact another story surrounding this event.  Here is a seemingly harmless day out at the beach being used to indoctrinate children.  Under the sponsorship of our taxpayer funded United Nations.

For those who fail to see the significance – look at the map on the kite.  It is the whole of Israel, a statement of Palestinian ambition.  Whether it is Hamas of Fatah, it makes no difference.  These people will not acknowledge the right of Israel to exist, and will not refer to Israel, either in words or image.

This is perhaps the story that is not told.  This is where the media miss the moment.  Instead of picking up on the cynical use of child indoctrination through education, and instead of drilling into the reasons why there is no peace, it is far better to ignore the real problem.  Maybe its not a story because we don’t expect anything less from children in Gaza?  Whateever the reason, it is always far easier to blame Israel as the cause of Palestinian suffering, and turn a blind eye to the catastophic way in which the Palestinians uncompromising position denies everybody the opportunity to move towards peaceful coexistance.

Palestinians refuse to come to terms with the existance of Israel, and every aspect of their day to day living contains images, innuendo, and euphemisms to support and culturally embed this stance.  That is the real story of flying kites in Gaza, but don’t expect to read about it in your daily paper anytime soon.