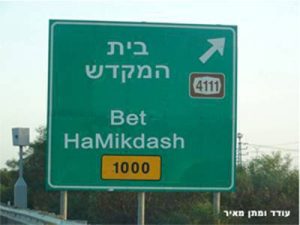 Next time I visit Jerusalem, may it be soon, I look forward to seeing the above roadsign one kilometre from the centre of the Jewish world.

Tonight is Tisha B’Av.  I am lamenting not over what should be (and will soon be), but over why we as the Jewish people are insufficiently motivated to hasten our redemption.

We live in an age of comfort and freedom.  The sheer thought or concept of forgoing a small amount of personal comfort for the sake of conditioning ourselves to the tragic moments of Jewish history seems a little too foreign for many Jews today.  However there is a paradox built into both the emotions of Tisha B’Av itself, and the contemporary disdain with which so many Jews shun any level of observance of the occasion.

I find it sad and ironic that I can return home from reading Eichah and Kinot, to find that all the while I have been reflecting on the historical injustices imposed on the Jewish people, some of my fellow community members have been sitting at home sending me emails about media bias against Israel.  I fail to understand why so many Jewish people are passionate about their Zionist identity, about Holocaust education, and about fighting anti-Semitism, yet completely dispassionate about Jewish tradition, observance and the religious construct that sits behind their Jewish identity.  I’m not sure what the point of fighting anti-Semitism and Israel bashers is, if there is no purpose to winning the battle.  When Zionist identity and Holocaust identity becomes a surrogate for Jewish identity for so many Jewish people, then we have somehow lost our way.

I was recently having this very discussion with a non-observant friend.   Not only can I well understand him when he says that he has no attraction to Shule based activities, but I can very easily agree with him.   When exploring the issue further he made several claims.  Firstly, that the atmosphere within any of the shules he has sampled seemed to be very judgemental.  Secondly, that the environment seemed to be contrived.  Thirdly, that the shule service itself was laborious and repetitive.

Whilst I do not entirely subscribe to these latter points, and particularly feel it is unjustified to make such a claim without putting in sufficient personal effort, there is still some validity to the above feedback.  Jewish people tend to be easily judgemental, but religious people in particular can easily become “holier than thou” if they do not place their ego into check from time to time.   This however is an individual matter of character trait as much as it is a communal one.

So too, a contrived environment is a fairly levelled criticism on many occasions.  More and more Shules in Perth and around the world are trying to put out glossy marketing brochures, attract people by tacking social events (some alcohol laden) onto their religious services.  For example, many of the services for Tisha B’Av tonight were not promoted by the service itself, but by inspriational videos and activities appended to Maariv.  Then, as well as the activities are the people.  If people try to be something they are not, or create an environment that is not genuine with conviction and true personal example, then prospective “clientele” will see right through it.

This is where our Synagogues are failing.  There is nothing wrong with saying that tonight is Tisha B’Av, and Jewish people who care about Jewish continuity should be participating in the shule service.  If you feel strongly enough to come to a Yom Hashoah commemoration, yet not strongly enough to to come to a reading of Eichah, then the magnetic force field surrounding your Jewish identity is imbalanced.  Our Rabbi’s teach that those who don’t join in the mourning of the destruction of Jerusalem will not share in the joy of its rededication.  So a sexy marketing campaign with posters and videos is not really needed to draw in a crowd.  A sense of self-responsibility, obligation, and committment is required.

From the individual’s point of view, if they see a Shule competing with any other form of “entertainment” or perceive that desperate measures are being applied towards attracting them, it simply reinforces the negative perception.  It sends a message that “The Shule is trying something else, because their traditional product does not work”.  It becomes the contrived environment that my friend easily detects.

In short, the Shule has nothing to be ashamed of by hosting a traditional and time honoured cycle of observance, for both commemorative events relating to Jewish tragedy, and celebratory events relating to Jewish conquest.  The people that do not participate have everything to be ashamed of, by not honouring their traditions, their family heritage, or their birthright.

I will reserve my comment on the length of Shule services for a later time.  However I do wish to return to the paradoxical nature of Tisha B’Av.  The City of Jerusalem has fallen more than 30 times since it was initially created by King David.  Whilst it has been notionally under Jewish soverigty for the past 43 years, a miracle that we don’t often stop to fully appreciate, the Jewish people have yet to restore its Temple, its Monarchy, and its Governance to observe the tenets of Jewish nationhood.   A little faith and trust in the redemptive message of Tisha B’Av will lead to immeasurable movement towards that ultimate goal.

The construct of Tisha B’Av is one of mourning and sadness.  Gradually we lessen the intensity of that mourning, and transform our grief and hope into joy.  We know that one day Tisha B’Av will be a Yom Tov of simcha.  We need to understand that Tisha B’Av is not just about torment and tragedy.  It is about rising from the pain of our exile, and restoring our alter of avodat Hashem.

Those of us who choose to stay away from Shule and use that same time to combat anti-Semitism have the choice to do so.  However I feel that somehow they will continue to identify strongly with the negative components of modern Jewish identity, and lack exposure and participation in the positive components of modern Jewish identity.  More than anything else, they will remain spiritually bereft of sharing in the mission and purpose of the Jewish people, which ultimately is not to secure freedom and rights, but to be a light to the nations and carry the mantle of ethical monotheism.

May we all join to rebuild the road to Bayit Shlishi.