More than ever the media, following cutbacks to news services, need to create and invent their own stories to provide content, much of which is utter trash. This is particularly so for “online news”.

For some weeks the media have been on a beat up about Kyle Sandilands. It is quite possibly deserved, from the little I have seen of him (I’m not an Idol watcher) I would not describe him as talented.

The latest incident has me riled. It is reported that Sandilands suggested on radio that, following her recent weight loss comedian Magda Szubanski should be put into a concentration camp to lose more weight. Whether this is a throw away line or not, people like myself have a right to be offended. Several of my European relatives starved to death in the Ghetto before the Nazi’s even had the chance to transit them to death camps. It is certainly not a topic to take lightly. I have recently read several books by Ellie Weisel, in particular “Night” where the conditions that Holocaust victims endured are graphically described. In one of his essay’s Weisel talks about the taboo status that the Holocaust had following on the war and its impact on survivors. He then talks with great passion on the breaking of that taboo. He notes how the trivialisation and the use of Shoah analogies further demean survivors and their descendents.

One of my relatives, Jewish by birth, but married to a non-Jewish Aryan, managed to relocate from Germany to Switzerland in the late 1930’s. In 1941, after two years of attempting to obtain visas for entry to join family in the USA, and following the payment of significant bribes to immigration officials, they managed to secure their documentation. This relative lived in the USA until 1992, and shortly before her death was encouraged by her family to write down her story. This is an extract of her risky and dangerous journey from Europe to the USA:

“My memory of the events that followed the receiving of our final transit visa is not terribly clear but I will describe the trip as well as I can remember. It was the Spring of 1941. My mother accompanied us to Geneva where we spent the night. The next morning we boarded our train. Besides our suitcases we took along a lot of food to feed us for several days. The train was sealed not to be opened through German occupied France. The train was full of refugees from different countries mostly Eastern areas. When we reached the French/Spanish border our passports were collected. After some time they were returned to the various owners except ours. We waited and waited. I was scared terribly, thinking that they would take Pieter and send him back to Germany where he was eligible for the draft. But finally our passports were given back to us without any explanation. We could get back on the train. We stopped in a hotel in Barcelona. In front of the hotel were several small children between 2 and 4 years of age it seemed to me-totally naked begging for food or money. It was a terribly distressing sight.

At one point I lost Pieter. I was so unnerved that I started crying, being sure he had been arrested. The refugees in my train compartment started to yell at me thinking that I cried because I did not have a seat. How little they knew about my fears. The train started to move and then I saw him walking down the aisle of the train. I can never forget that fear that I felt. Then one more terrible sight. We passed long stretches of barren land with chicken wire or barbed wire fence separating it from the train track. Behind the fences were many, many political prisoners- men with shaven heads and gray garb looking longingly at our passing train. When we reached the Spanish/Portuguese border we were little prepared for what would happen. The trains stopped and hundreds of small children climbed the outside of the train begging for food.”

These scenes from the war were not inside the ghettos or the camps. The situation there was far more dire. So many accounts of prisoners who would trade anything for a crust of bread to keep them alive are loaded into the literature of the Holocaust. Starvation is no joking matter, neither then, nor in today’s world.

Decent and sensitive people have every justification to be offended by Sandilands comments.

Unfortunately the issue does not stop there. We need to go back and look at the media, who have profiled this issue. By making it a national headline, some will conclude that the matter has been taken out of context. Then there is also the issue of free speech, and what is or is not an appropriate standard. On that matter we can all draw our own subjective conclusions. 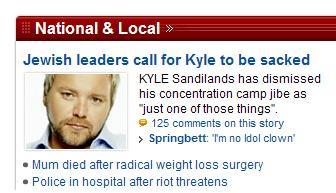 A double standard starts to emerge here. For whatever reason, the slant of the story changed. News.com.au ran a story with the headline “Jewish Leaders call for Sandilands to be sacked”. No problem with that – the comments are of offence to the Jewish community and there is a role in the discussion for our community. As an aside, it is a shame that Jewish community leaders are only asked for comment over “victim based” situations where anti-semitism is an issue, and not over positive social issues over which there is also much to say.

Within the article AIJAC’s Jeremy Jones makes the valid point that “There are people who confuse freedom of speech with gratuitous, insulting, offensive behaviour. They’re two quite different things.”

The irony of this, and the emergence of the double standard comes with the comments attached to the article. Free speech once again becomes a notion that is abused, as the media promoters of this item then go on, in the name of free expression, to publish what are clearly anti-semitic comments from readers in response. At the time of writing this blog there are 182 comments to this story. Here is a selection of some of them:

Why do these Jews complain about every thing?  The comment was disgusting but PLEAZE!! Every little chance to be in the news and they gas bag away…yes little Fritz and Josef was evil and Kyle’s a rancid motormouth bla bla bla..BUT…This was not about Jews! Go make some money! Yeeesh!…LOL

Do these jews ever stop whinging about anything and everything? Sandilands did not mention jews, so there is no racism for starters, and jews are not the only people who have been put into these camps.Lighten up poeple and treat it as it was , a bad joke

maybe Kyle’s comments would have been ok with the jewish/israeli lobby if he’d said “put magda in gaza”????

Is funny how everyone comments on how low Kyle is and how he should get booted off air because he offends people with his comments and now the Jews are joining in on the chorus by trying to label him anti Semetic,what a load of BS,get a life everyone far worse happens everyday to take offence to

Concentration camps existed in Bosnia as well. Haven’t heard a complaint from a Bosnian like you do from a Jew.

How sad that Jewish leaders are so precious …. stop whinging!

The Jewish community should back off. Kyle did not mention the jewish Community, it certainly seems that the Jewish community still insists that any mention of concentration camps is a direct attack upon them. Jews weren’t the only ones who suffered and/or died in concentration camps throughout history, but certainly seek to make the most mileage out of it

I don’t like Kyle in any shape or form, but for crying out loud, can you all stop being so sensitive..what gives Jewish people the right to supress ANYONE’S freedom of speech including topics (jokes, fact or fiction) regarding concentration camps??

Oh come on! news just assumes that all Jewish people will be offended by this. What rubbish. Sure Kyle is a moron no doubt, but its not like he has endorsed or encouraged the gassing of Jews. He made a comment that although distastefull to some, is probably quite true. And I love Magda and think what she is doing is great. Loosing weight whilst grabbing some cash from a Global market leader, what could be better. And why are we all so affraid of upsetting the Jews? They are not the only people to be persecuted. Anyway, they run the world economy and their imaginary invisible God is apparently the best one!

In many European countries you can deny that God exists. But you deny holocaust and you go to prison. Examples are Austria, Switzerland, Germany etc. Jews run this world. I can assure you that just because some jews raised concerns, Kyle will be banned. Where’s the freedom of speech, expression etc?

what annoys me the most is that I’ve heard kyle bag out russians, the nazis killed alot more orthodox russians then jews, you don’t hear the russians complain, why is that, oh yeah because they dont have any lobby/ interest groups with their hands in everything

Notice how its turned into a Jewish debate again, I think they just love making everyone feel sorry for them all the time! Its like they have little radars that pop up when they hear concentration camp or anything that will link to them.

Leave Kyle alone. He’s a comedian. THIS IS AUSTRALIA NOT A JEWISH COUNTRY OR AMERICA.

While it is fair to note that the vast majority of comments on the site are critical of Sandilands and note that his remarks were offensive, I think the problem here has been exacerbated by the lack of editorial discretion from the publishers of this newssite. Having read the news item and the comments, I am less concerned by the moronic comments of Sandilands, and more concerned by the actual anti-semitic sentiment, evidenced above, that is perpetuated by the media agency in response.

Some of the themes – Jews control money, the media, supress free speech, exploit the Holocaust, do the same to Palestinians, are all evident in the comments.  These are anti-Semitic carnards par-excellance.  Whilst they may be the sad and sick views reflective of so many bigots in our society, I suggest that more harm than good is done by a supposidly respectable media company perpetuating these views through their comments facility.  It causes far more damage to people like me than the outrage that the initial article is attempting to stir up.

Free speech is important. So is the appropriate use of free speech to avoid racial vilification. News.com.au may claim it is the readers and not them who are putting these statements forward. But at the end of the day, they are the publishers of the remarks. I am more offended by these readers comments than I am by the statement of Sandilands. Sadly, the media are part of the problem, not part of the solution, by allowing these sentiments to become valid expressions of discussion in response to the article.  It is not just the tone of the comments themselves, but the actual inherent allegations within the statements that are totally beyond the bounds of reasonable discussion and decency.

It is a sad day and age that we live in, if public viewpoints such as these are normative expressions that meet the requirements of an everyday editorial policy.  Shame on News Limited for their lack of editorial discretion.