There could have been no better way for the PHC to commence its 120th year celebrations.  The euphoria of the visit to Perth by the Chief Rabbi will linger for some time.  The Rabbi made a number of public addresses that endeared him to a broad audience base.  His ability to address such a wide variety of topics, and to impart such a positive and warm insight into Jewish thought is truely unique.  In his keynote presentation to the open community was only enhanced by the superb facilitation skills of Adam Levine as the interview host.

Amongst the valuable presentations was an address by the Chief Rabbi to the youth.  A packed Beit Midrash, without even any spare standing room, engaged in discussion with Rabbi Sacks about diverse topics such as Torah and Science, leadership, and the existence of G-d.  That so many students, from high school to University, took this opportunity to participate in this session was in itself inspiring. 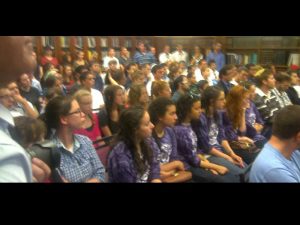 In the previous blog post I noted that the Chief Rabbi has clear areas of strength, which he leveraged to great effect during this visit.  His address to an interfaith audience hosted by the Anglican Arch Bishop was of tremendous value in building relationships, connecting the Jewish community, and articulating a tolerant base upon which faith based communities can  share dialogue.

Rabbi Sacks himself admitted, when asked about his reasons for retirement, that the job of Chief Rabbi came at the opportunity cost for him to write, travel, and engage.  He noted that the number of books he still has to write, exceeds the number of books he has already written.  In an ironic way, the duties of the Chief Rabbi to the Orthodox Synagogues communities of Britain (the Beit Din, community and Rabbinic duties) are almost a distraction from the ability of Rabbi Sacks to optimise his talent as an orator and philosopher.

I would love to see a new role formed for Rabbi Sacks that is an emeritis theological post.  Rabbi Sacks should be to Diaspora Jewry what Natan Sharansky is to the Jewish agency.  Without the ceremonial Rabbinic duties of the office, but whilst retaining the mandate to represent the Jewish community, Rabbi Sacks should be the public face of interfaith dialogue.  In the process, the office of the Chief Rabbi could divest itself of this focus, returning instead to focus on the Rabbinic business of growing Jewish education, observance, and identity from within.

Rabbi Sacks also said he believed strongly in the universal message of Judaism.  He has forged a rapport with the British public as a contributor to social debate.  This is from within the House of Lords, from within the studios of the media, across the pages of the press, and through the medium of the internet.  A small but very powerful example of this was on display yesterday in the Perth Town Hall.

As a connected observation, it was evident that no public media were covering this address, to an audience of hundreds of people, including civic dignitaries.  This was not a slight on the Chief Rabbi or the Jewish community.  It is however very indicative of a major difference between Australian and British society when it comes to the exposure of religion, and the contribution of religious viewpoints to conversations that impact ethics, culture, public policy, and communal harmony.  The British community is more secure in its faith based tradition, and more tolerant of incorporating a religious perspective into its discussion.  In Australia we are far too secular to embrace a religiously founded viewpoint.  In Australia, religious leaders of all persuasions receive no media platform to persuade.  Their only press coverage comes through derision or negative news stories.

Rabbi Sacks stated clearly that he believes in the separation of religion and State.  However he sees room for the religious perspective to be heard and respected.  In discussing the risks of fundamentalism, he noted that a fundamentalist is someone who attempts to impose their view on everyone, who will not accept that there is another view that is different to their own that is still freely expressed.  Such a view can be respected without being accepted.  The Jewish religion is a strong exponent of pluralistic expression, but the dynamics of how Judaism structures and protects itself from the risk of puralistic self-destruction are often gravely misunderstood.

The great talent of Rabbi Sacks should be channeled to impart this message to the non-Jewish world.  The more opportunity he has to engage with both religious and secular society and speak to people that would otherwise never come into contact with a Jewish thinker, the better off the world will be.  My previous comments about the future of the Office of the Chief Rabbi stand, however I only wish to add that Rabbi Sacks should be elevated from the role of Chief Rabbi, to the role of Ambassador of the Jewish people.   Irrespective of the role title, his activity in this area should only grow in stature and influence, and he should be blessed with many more years as a respected commentator, and leader who represents the power and learnings of 4,000 years of enduring Jewish tradition to people of every faith and creed.