This is what some of the people in our city do with their precious right to the freedom of speech (a freedom that is not reciprocated in Palestinian ruled society).  They conjure up the most offensive comparisons of Israel’s defensive war against bomb attacks to the Holocaust of Nazi Germany that killed six million Jews during an era when there was no Jewish nation with the ability to defend itself.

How can any person in West Australia tolerate this type of behaviour in our streets?  How can the depth of hate run so deeply, and how can such warped and outrageous claims be made? 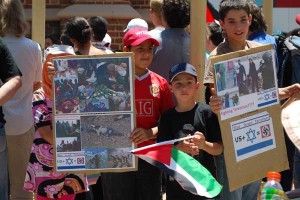 The gentleman to the left of the photo below carries a caption “Stop Genocidal Holocaust Against Palestinians”.  I can only say that the only genocidal holocaust is the one being waged by the Palestinians and their Iranian backers, who wish to eliminate Israel as a nation. 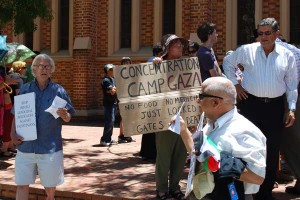 Australia is heading down a long slippery road when it starts seeing images such as these in the centre of its cities.  Using children to make racially inciteful claims equating Jews with Nazi’s and invoking images of the Holocaust to vilify the Jewish nation is open anti-Semitism in our streets. Just what are these children being taught to believe, and just how dangerous is this for the future wellbeing of our free and fair country?

You decide. If you feel this is not right, then make sure your protest is heard.

For the past seven months more than half a million Israelis have been under daily attack. Israel has finally decided to take action, in a way that any other nation would. It is carefully controlling that action to avoid civilian casualty as much as possible. It is letting in humanitarian aid, treating injured Palestinain civilians, and dropping notes and warnings in order to clear areas prior to removing terrorist infrastructure.  Is this Nazism?  Is this Genocide?  Israel has absorbed more than one million Palestinains into its society as Citizens, delivering social services, employment, education, and political representation. However it also disengaged from Gaza and delivered political autonomy to the West Bank in order to help build Palestinian self determination.  It offered 97% of that territory as a state and the offer was rejected. Could every objectively minded person please ask themselves if this is a Holocaust?  Is this ethnic cleansing?

This outrageous protest in our streets shames us all.